Since the Bike Academy was founded, we have been working together excellently with the tourism regions of the Kitzbühel Alps and together we are putting together perfect bike programs for the mountain bike season. Every day you will find various mountain bike courses for many skill levels in the Brixental and in the St.Johann in Tirol area. The tours and riding technique training courses are listed below under Bikeacademy Instructions: 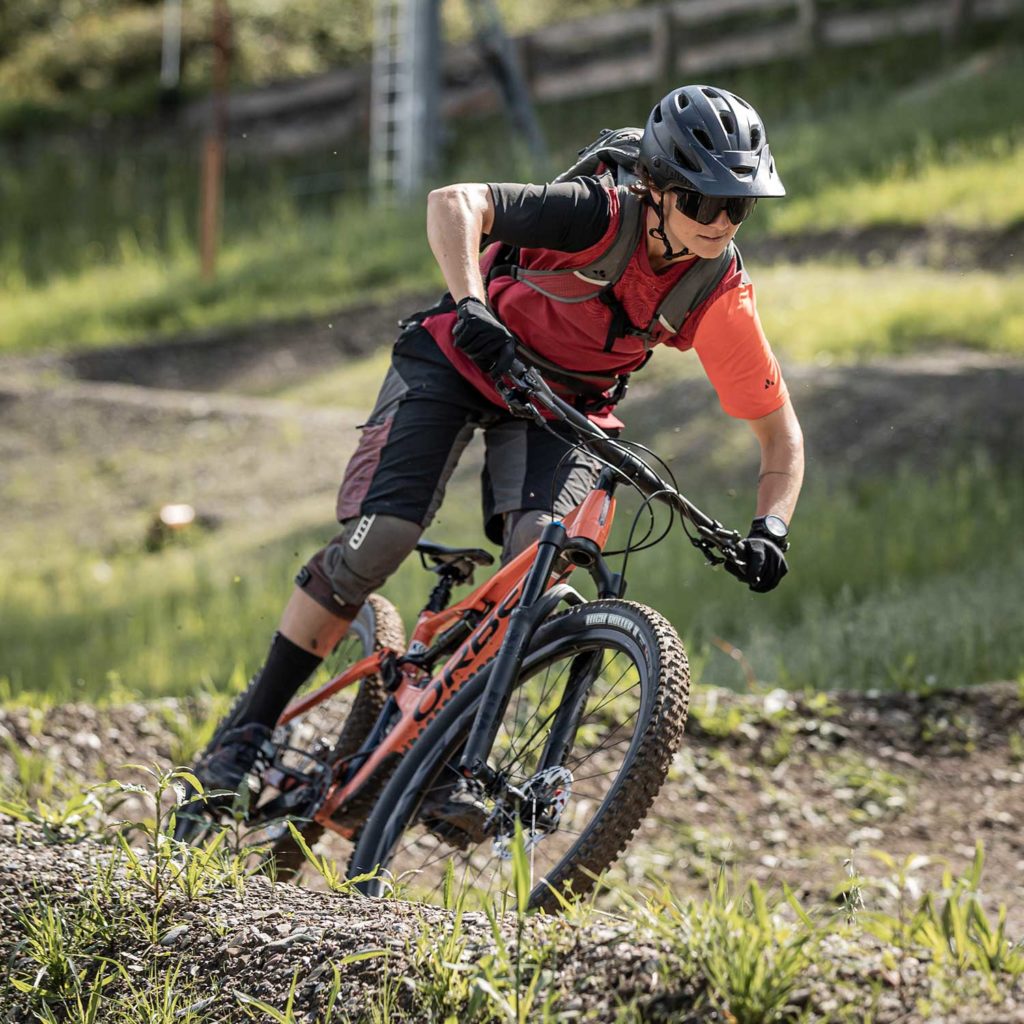 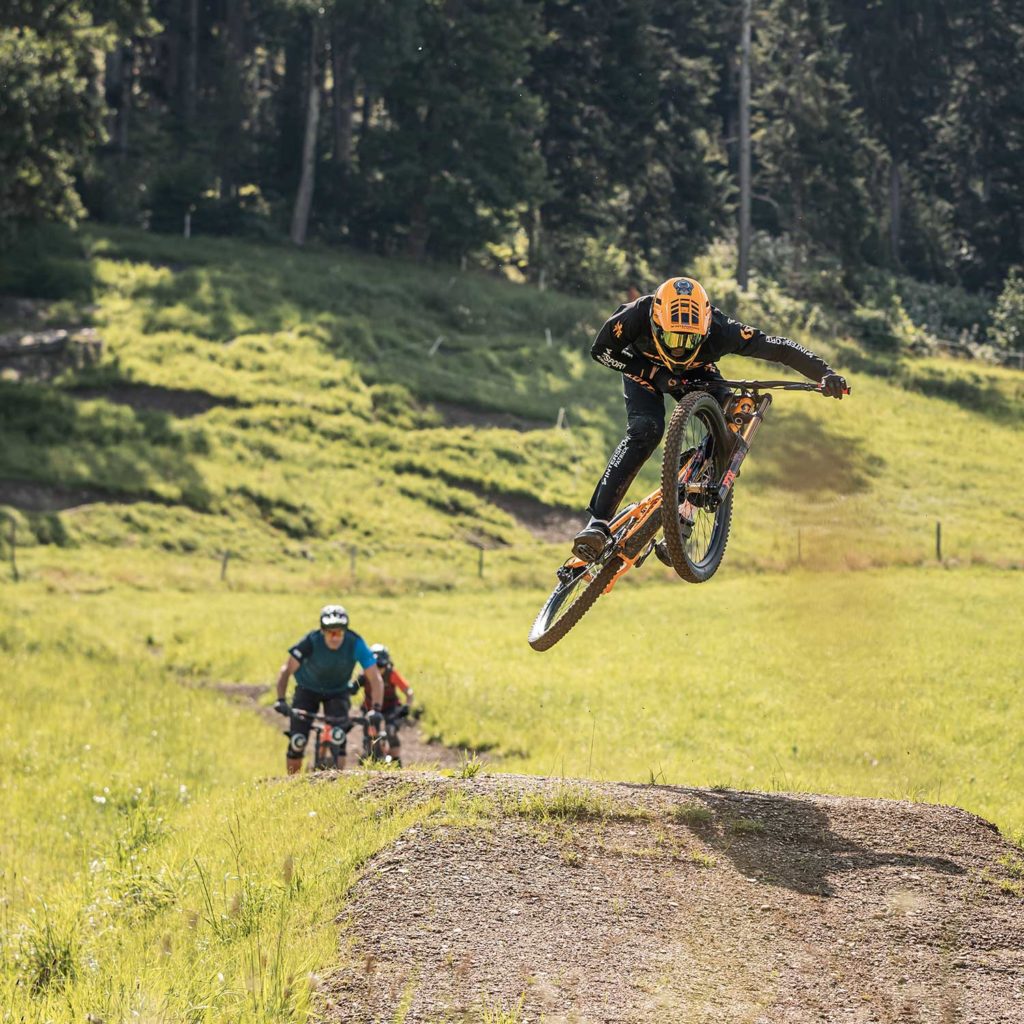 The entire, great and varied weekly program of the Kitzbüheler Alpen Brixental tourist office in the communities of Kirchberg, Brixen and Westendorf can be found by clicking on the picture! More than just mountain bike courses …

And the weekly mountain bike program of the St. Johann – Oberndorf – Kirchdorf – Erpfendorf tourist office is listed by clicking on the picture! This also includes the mountain bike courses with the Bike Academy!

AS MOUNTAIN BIKERS, WE LIVE IN THE MIDDLE OF BIKE PARADISE!

The OD Trails – our location

The Bikeacademy Homebase at Intersport Patrick is the starting point for mountain bike courses in the perfect practice area and for tours in the Kitzbühel Alps!

Little bikers, beginners, but also professional cyclists experience lots of fun and action in the new OD Trails (ObernDorf Trails)! The OD trails in the St. Johann in Tirol region offer ideal conditions for bikers who want to gradually improve their skills. The center of the new Trail Arena is the Jump Park. It belongs to the Green Line, the easiest route. With a length of 900 meters and an 8.9 percent gradient, the line is ideal for getting a good feel for your bike. The kids ride their first perfect turns and find the center of their bike on bumps and scooters. With little sense of achievement, the fun of sport is maintained. Those who feel safe on the Green Line can continue to improve from the blue to the red to the black trail.

In 1999 we founded our mountain bike school right here. We built and maintained this practice area with our own hands. It is now looked after and maintained by the Kitzbüheler Alpen – Brixental Tourist Association. World champions in marathon and European champions in enduro have already been crowned here and stars of the cross country scene have done their laps. Max Foidl and Lisi Osl grew up here with our mountain bike courses, among others. We have root trails, flow trails, hairpin bends and jumps as well as a pump track for practicing. Already pretty perfect to prepare for the challenge of the Fleckalmtrail, for example. If you wish, we will start your training here!

A great practice area for mountain bike courses with children and beginners with a modular pump track, flow trails, rock gardens and some jumps. The huge parking lot is great for games in groups and other technical exercises.

Bikepark Leogang – the most famous bike park in the Alps

It takes 25 minutes to get to Leogang from St. Johann by car or conveniently by train. We now also offer private courses as well as mountain bike courses in the most famous bike park in the Alps! You can now train at Bikepark Leogang with all skill levels. Kids, beginners, advanced up to the real pros will be happy in the Bikepark Leogang and can learn the targeted skills with us.

Over 80 km of lines & trails and 9 mountain railways on 7 mountains await you in Saalbach Hinterglemm Leogang Fieberbrunn! Six modern mountain railways in Saalbach Hinterglemm, two in Leogang and one in Fieberbrunn bring bikers with just one ticket quickly and comfortably to the most beautiful peaks and to the entrances to the coolest lines and trails.

The Fleckalmtrail is one of the five “Great Trails” Tyrol. With a length of 7.1 kilometers, the Fleckalmtrail is one of the longest single trails in the country. In the midst of the impressive mountains of the Kitzbühel Alps, the varied route winds its way down around 1,100 meters in altitude. On the seemingly endless descent, root passages, larger and smaller jumps, finely laid berms, occasional short counter climbs and fast speed sections ensure the perfect enduro feeling. The demanding route requires a certain amount of concentration, stamina and driving technique. In order to ride it more safely, book mountain bike courses with us!

Over a length of 7.2 km and a total of 850 meters of altitude to be overcome, it goes directly from the mountain station of the Hahnenkammbahn down to the Gamsstadt along a variety of trails and paths.

The flow trail leads over the famous Hahnenkamm and starts at the mountain station. After getting off, the famous “Streif” race track runs on the right, and on the left the trail leads into the valley, where beginners and advanced skiers will find fun and variety. The route is family-friendly, with simpler key sections and playful elements. Thanks to a clever route, the trail manages without many artificial elements. Natural passages, meadow curves, small waves and jumps as well as natural obstacles offer variety and action for the whole family. The only thing that encourages you to brake is the beautiful view of Kitzbühel from time to time. Mountain bike courses with the Bike Academy.

In the footsteps of the cross-country world cup legend Lisi Osl, you can follow the single trail of the same name on the Gaisberg in Kirchberg. Named after the big daughter of the region, the approximately three-kilometer route guarantees pure downhill enjoyment. You start right at the mountain station of the Gaisbergbahn at 1,270 meters above sea level. The mostly natural route offers flowing passages and a multitude of the finest serpentines at around 450 meters above sea level. The trail from the Gaisberg is really tough, pretty steep, narrow hairpin bends, stones, roots, steps. Advanced enduro riders have fun with it, beginners and kids only in the lowest section – this is quite flowy! Here you can also take mountain bike courses with us.

The Gaisberg Trail on the mountain of the same name in the Kitzbüheler Alpen region is an offer for all those who like to rush downhill with a lot of spring action. As the venue for the Austrian State Downhill Championship 2014, the two kilometer long descent offers non-stop action: partly soft forest floor, lots of roots, speed sections, jumps over the edges of terrain or wooden structures. For the demanding descent over 450 meters in altitude, a certain amount of driving technique is necessary. The trail is consistently rated S3 on the single trail scale.

The Gaisbergtrail runs below the lift route of the Gaisberg chairlift.
Technically demanding, he has built in a few jumps and drops for downhill riders.
Chickenways as an alternative are available.

Sun Trail – Flow in the woods

The start of the Suntrail is at around 1,340 m above sea level on the Gsengweg. In the upper part, the trail swings through a forest, which clears towards the middle and then merges into alpine pastures. On the fluid, bouncy single trail you can quickly find a successful rhythm between waves and curves. After crossing the Raggingbach, it goes downhill again over waves, tables and berm curves along the creek. The trail ends near the power station east of Brixen.

Harschbichltrail – the natural flow trail in the Kitzbühel Alps

As a mountain biker, you will not only find beautiful mountain bike trails in the St. Johann in Tirol region, but also one Single trail as well as a skill park. The naturally designed facilities will make your mountain biker’s heart beat faster. The Harschbichl Trail was built by renowned trail designers. Exciting passages and rapid banked curves promise the greatest driving pleasure! The trail leads from the middle station of the Harschbichlbahn down to the valley station. The level of difficulty of the Harschbichl Trail is medium in the upper part and easy in the lower part. In addition, the ambitious mountain biker on the single trail with an incomparable View of the Wilder Kaiser rewarded – a MTB trail with a view of the Kaiser. Swing in the saddle and experience the mountain bike single trail in St. Johann in Tirol!